“If I who is Deaf and blind, find life rich and interesting, how much more can you gain by the use of your five senses!” Helen Keller 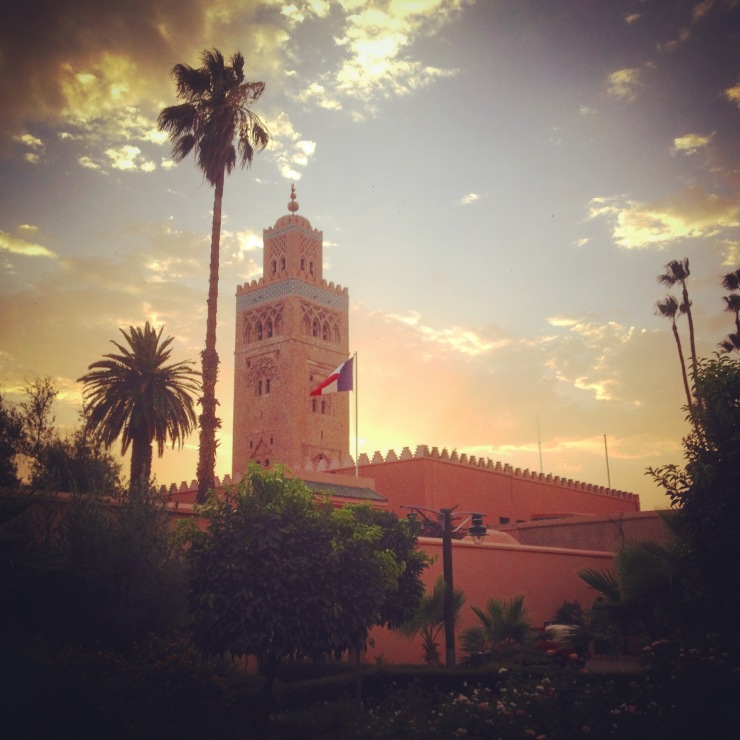 The human body with its intricacies and imperfections is undoubtedly a work of art. Like clockwork our internal components ensure we are who we are, effectively allowing us to survive. Out of the millions of bodily functions which we unconsciously perform each and every second, the brain plays a pivotal role in this well orchestrated performance. Not only this, but it has to be one of the most fascinating and mysterious organs within any living creature which graces this wonderful planet.
On this basis could you truly imagine living without senses?
Touch, smell, taste, and everything that we hear around us. As humans these are key to our beings. Isn’t it funny how a particular smell, or even a piece of music can spark a memory. Digging deep down inside of us somewhere, and churning out some forgotten emotion relating to a specific moment in time… That’s extraordinary;  An extraordinary which has inadvertently become rather ordinary, or at least somewhat expected. As a collective we generally take for granted our faculties other than sight.
This relates to travel in a major way.
When we visit places are we appreciating our destination fully, or are we just looking at what is on the surface?
Do you take in the fragrances, do you get hands on, do you close your eyes and just for a few seconds open your ears?…
Realisation for myself of how undervalued our sensory organs are came in a location which brutally attacks all the senses of the body on every level possible, from the smells to the sounds it’s an assault on human ignorance. That place is Marrakech!

Quite often mistaken for Morocco’s capital, Marrakech is situated in the shadows of the elaborate Atlas mountain range. Snow tipped desert cliffs which spread out into the surroundings provide the picture perfect backdrop to this wondrous city. Although snow resides on these mountainous ranges, the weather in Marrakech is of the opposite nature. Blisteringly hot and sunny is par for the course, so it’s important not to forget sun-cream and a shade inspired hat. Not too much of a surprise really when you’re located in the north of Africa. What might come as more of a shock though is that flights from London approximately only take three and a half hours…  That’s quicker than flying to many European destinations.
Prices for said flights can also be found at really economical rates if travelling at the right time, meaning trips can be quick and low-cost. Ideal for those looking for either short breaks or longer stints away. It gets even better, Marrakech with its historical wealth offers luxurious accommodation in abundance, and again all for a very affordable price. 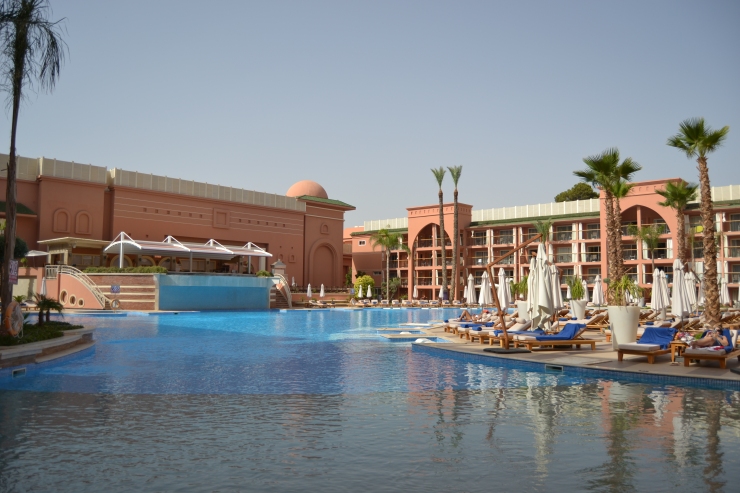 Hotels are priced accordingly as you would expect anywhere around the world, however be aware that certain larger hotels wanting to fill capacity in the off-season occasionally cut prices to an almost steal for travellers. Be that as it may, visiting Marrakech and not staying at least for one night in a riad would be a monumental mistake.
Explained to me prior as a traditional guest house, it didn’t exactly enthuse, especially with a five star hotel offering a deal so good it didn’t seem real. My partner however who had instigated the trip was insistent… Riad or nothing…  So we split the trip.
I hate to admit it but she was right.
How wrong I could of been. Riad’s are not the typical guest house we are accustomed to, with tobacco stained paper tearing off the walls, chewing gum underneath the beds, questionable decor, and hosts of the Basil Fawlty ilk. These artistically designed buildings offer privacy and luxury fit for a Prince.

Marrakech with its boisterous hustle and bustle can for the unprepared be too much to handle. Even for those who are more accustomed to its noise and sensory abuse at times need a little respite. Within the walls of the city however this isn’t particularly easy, unless you walk through the doors of a riad. Like stepping into the cupboard and appearing in Narnia, from the outside these buildings are nothing short of unassuming. Step across the threshold however and be rewarded with lavish beauty, an essence of tranquillity, and most importantly an astonishing peacefulness. It’s hard to believe that riads and Marrakech go together like a sunny day and a ice cold beer, but they surprisingly do. Once inside it’s a forgotten memory that outside those four walls of seclusion is utter madness, for within these confines there’s a feeling of almost being hidden away from the rest of civilization. You could be literally anywhere in the world and have the sense that not a soul would discover where your body lies resting.  It’s about balancing the crazy with the subdued. The hectic with the relaxed. The hot with the cold, and Marrakech does that incredibly well.

Sat above the Jemaa El Fna watching out upon the Medina’s local melting pot of society, an area of congregation, food, and entertainment is a prime example of how to see Marrakech’s two worlds roll into one. From a perch above this historical square, it all manages to look so calm and picturesque. On the contrary, down below is anything but calm. It is chaotic, seemingly unorganised and enough to make the most placid of people edgy and tense. From the snake charmers and monkey handlers, to those trying to sell you orange juice or some local merchandise, you’re attacked from all angles without a moments respite. So much so you’re unable to breathe or think straight at times. It is effectively like entering a claustrophobic persons worst nightmare. Hassled and harangued quite literally with every step, the blonde hair blue eyed foreigner stands out like a sore thumb, and like ants to honey is honed in on by the hoards within a blink-of-an-eye. Fight your way through all this however and it’s quite a spectacle, especially as dusk descends in the shadow of the exquisite Koutoubia Mosque… Marrakech begins to bristle with life.

Like most famous central locations the Jemaa El Fna is a focal point, and a link to the majority of activity in and around the city. Marrakech is famed for its vast network of souks; local owned stores which range for miles and sell anything from hand crafted woven carpets to traditional tea sets. The streets of souks spread out from the Jemaa El Fna almost in every direction possible. Twisting and turning this way and that, tightly compacted underneath sheets to protect occupants and visitors alike from the suns scorch. It’s a maze like no other. A maze in which it’s almost impossible to guide yourself successfully through. With the vast amounts of people, and identical looking alleyways it’s inevitable to lose your bearings. This isn’t made easier by being unable to view the surroundings either. When finally finding an alleyway which breaks out into the bright outdoors again, more often than not you’ll be some distance away from where you believed yourself to be.
Once immersed amongst the souks the noises from outside drown out. Never the less within this network your senses are once again brutalised, as if being hit in the face continually for twelve rounds by Mike Tyson. This time from the indescribably pungent aromas which congregate in the vicinity. 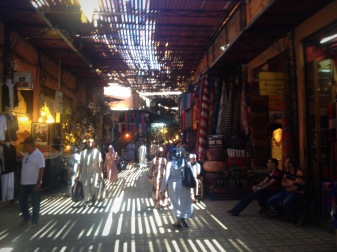 Indescribable as they may be, these scents are distinct and a mixture of flavours. Some pleasant, and others not so much. The stench of animal meats being sold without an ideal cool climate, grabs you by the back of the throat viciously. Yet the essence of naturally made perfumes, fills the air with rose and lemon.
Meanwhile the fragrances which exude from the array of spice stalls, are really something to savour. Numerous fresh ingredients by the sack load line the paths, with the brain struggling to take in the amount of aromatic information. Whilst your brain struggles to comprehend these smells the eyes are feasted to a wonderful array of colours. Bright reds and yellows from such spices as turmeric and paprika, both extravagant and exquisite give life to the area. The souks are the true heart of Marrakech, and it is a real sensory overload.

Vibrant colour does seem to be ingrained within Moroccan lifestyle, and that is exhibited within its architecture. A trip to Marrakech without visiting some of the local palaces, gardens, and traditional buildings would be an opportunity missed. As the rhetoric continues these places feel another world away from the boisterous and full on antics associated with the city. Bahia Palace, The Saadian Tombs, El Badi Palace, Menara Gardens, and even the Marrakech Museum all provide stunning artwork, scenery, and architecture, plus an escape from the real world.
But none as much so as the Majorelle Gardens, which are as quaint as they are exuberant. A two and a half acre botanical gardens created by French artist Jaques Majorelle over a forty year span, now open to the general public having been restored by fashion designers Yves Saint- Laurent and Pierre Berge back in the 80’s. A mixture of wildlife and stunning artistic designs, added to a chilled ambiance provides its visitors with pure beauty and relaxation whilst stimulating the body with some stunning visuals. Around every corner another surprise for the eyes to be treated to. As with everything else Marrakech, unsubtle and totally over the top, yet marvellously magical.

Marrakech is what it is, a destination like no other. It’s almost guaranteed that the place itself is not everyone’s cup of tea. Those unable to adapt to the harassment will either internally combust, or end up never leaving the comfort and privacy of their own accommodation. Whilst those who aren’t able to fine tune their senses, will find it’s too much for the body to process.
However for those able to alter their mindset, and become more accustomed to Marrakech’s abruptness then it is something really quite special. Luxurious and peaceful in the center, combined with a raw and crazy nutshell. Two separate worlds which would usually never combine, going together hand-in-hand, almost complimenting each other perfectly. If there ever was a beautifully bipolar city, then this would be it.
Let the senses which have become so close to obsolete within a mundane lifestyle be stimulated, embracing a new culture as you do so. Engage your ears and listen to locals excitedly chatter away giving the city an almost constant buzz, or appreciate the sound of its silence. Open the eyes and really look deep into those vivid colours to find what intricate artwork lies beneath, in architecture which is difficult to be rivalled. Let the nostrils widen and extract all the aromatic information, separating the fragrances rather than letting them all break your nose at once. Taste a real Moroccan culture, with its flavoursome dishes combining sweetness and spice.
Marrakech is an attack on human ignorance via sensory overload. But my advice would be to let it… Embrace it, and come out the other side better for it. Whether you love it or you hate it, one thing is for certain, you won’t forget Marrakech in a hurry.