“Time does not change us. It just unfold us” — Max Frisch 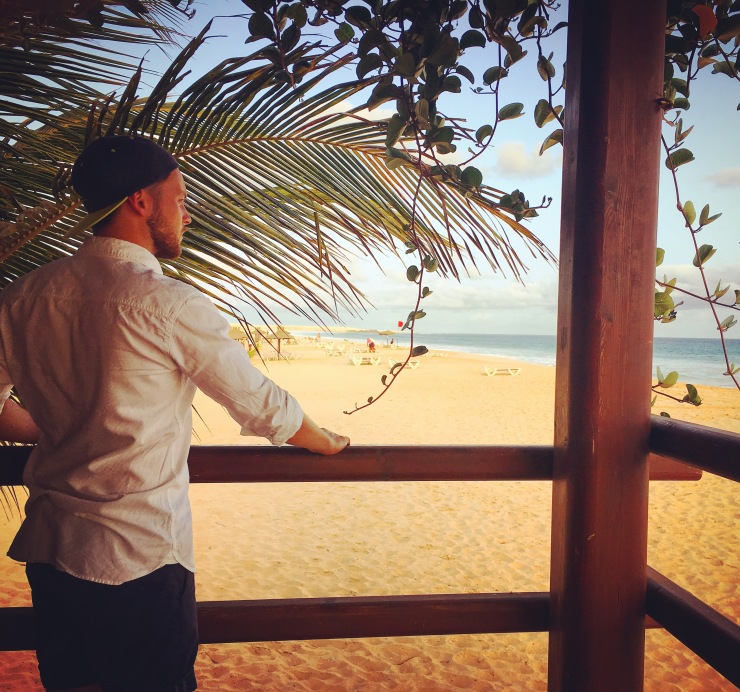 With the passing of every second our world is ever changing. From lifestyles to the latest trends modern pop-culture is on a continual shift, and with that comes development, progress, and inevitably change. What we consider the norm will eventually be consigned to history, with what we witness with our very eyes unable to be experienced again. Not only does this relate to the trends of our society or landmark moments though. It is important through our travels to observe how the world around is also going through significant changes, some of which can be seen in a positive light, whereas others most definitely negative. Cape Verde (or Cabo Verde as it’s known by its inhabitants), is one of those places which at this very moment in time you can observe change happening quickly before your very eyes.

These 10 volcanic islands situated in the Atlantic Ocean off the coast of Senegal had once been colonized by the Portuguese until independence in the 1970’s, and although Portuguese is widely used it is the culture and language of Cape Verdean Creole which you will find to be much more commonly associated with the country. A 3rd world country only 10 years ago now considered 2nd world, with tourism playing a key role in this. Island tranquillity is provided for a relatively cheap cost in comparison to other similar resorts due to its relatively unknown tourism status, and although it is becoming more aware of it’s certainly still a very up-and-coming destination… But the question is for how long?

On arrival to Boa Vista you get a real sense of how as a country it’s still very raw. An open top airport not much bigger than your local supermarket, with a structure which resembles that of a beach rum shack greets excited newcomers to the island. However, it is on the journey out from the airport that the landscape really grabs your attention. A landscape of rough barrenness for as far as the eye can see, which if it wasn’t for the considerable number of goats wandering about, you could be forgiven for thinking that you had in fact landed on Mars. The roads (or lack of) leave something to be desired, and might be all fun and games if you were Lewis Hamilton in a rally car, but it just isn’t the terrain for large coaches full of tourists or those who get easily car sick. If however you do survive the journey, it instantly becomes apparent as to why the islands stock is on the rise. As you reach the coast feast your eyes upon a crystal-clear ocean, accompanied by miles upon miles of untouched beach with sand as white as snow. 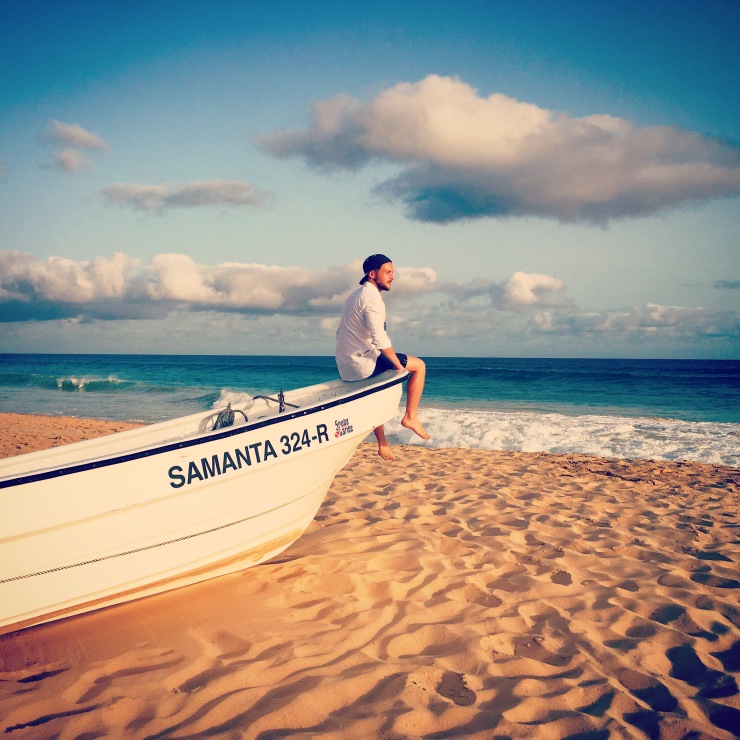 The vast amounts of unspoilt beach and clear turquoise ocean is by far one of Cape Verdes biggest selling points. Not only that but because of the endless amount of coastline it’s far from crowded, and realistically you could quite easily walk to a spot of beach and not have a sole in sight if that’s what you wished for. With a warm sunny climate all year round, it provides an almost perfect travel destination weatherwise.
I say almost perfect because it is a windy island, ranging from gentle breezes to full on “batten down the hatches” style storms.

Unfortunately, the amazing coastline does have its quirks as the Atlantic Ocean aggressively attacks the island with a vicious undercurrent, and ferocious waves which break right at the edge of the water. The major hotels do provide lifeguards and a designated swim area, although they will be red-flagged more often than you manage to over indulge in the all-inclusive bar. If you are lucky enough to land a day where the sea is relatively calm you must take advantage, as most of the time even paddling up to your knees can feel like a game of Russian roulette. If you’re able to be content and accept that you might not be able to spend your entire holiday bathing in the crystal-clear waters, and are more than happy to cool off in natural salt water swimming pools then it shouldn’t be an issue. To be honest, on some days where the ocean is at its most volatile my advice is take a seat, sit back, and enjoy the show. The awesome force of nature surrounded by tranquillity in its essence is truly spectacular. 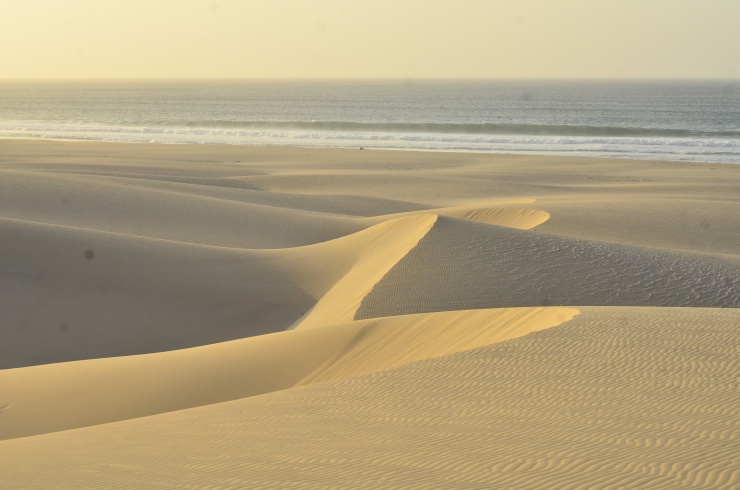 There is alternatively Santa Monica beach, named after its famous counterpart in California due to some striking similarities. A beach set amongst the desert sand-dunes, which unsurprisingly has been listed many times as one of the best in the world. Not only this but it literally seems like it’s the only place on the island where there is a lack of undercurrent, meaning going for a dip is possible… Just don’t expect a millpond, it still gets quite rough and requires caution for even the strongest of swimmers. The desert dunes which surround Santa Monica are in their own right a sight worth seeing. Untouched, unspoilt, and quite magnificent. My advice to see both would be to take a quadbike tour of the south organised by your tour operator. Instead of travelling by a hot stuffy tour bus, have yourself hours of fun driving through terrain which you wouldn’t normally be able to get too by any other means. It also allows you the opportunity to see the landscape of Cape Verde up close and personal, and it really is quite breath-taking. 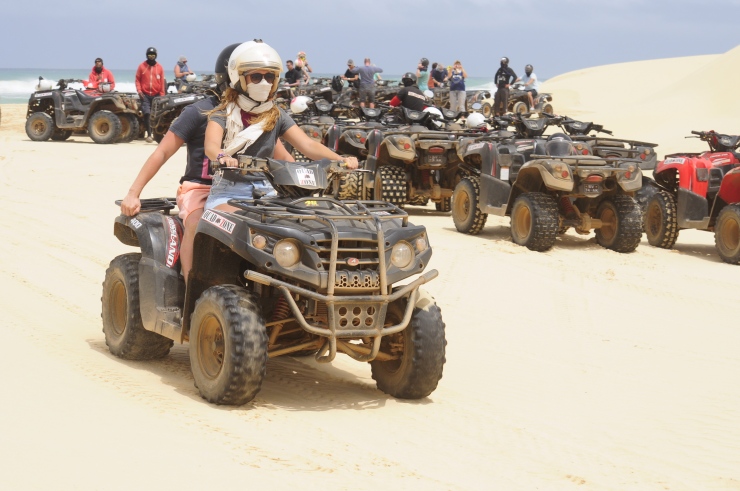 The issue Cape Verde currently has is that because of it being an up and coming country, getting around and seeing places can be difficult. Which plays into the hands of the tour operators, as your only way of really seeing the island is through their excursions. Excursions can be great like the quadbiking for example, but they can also be over priced and disappointing. An excursion to Sal Rei the capital of Boa Vista was something which was greatly anticipated, but ended up being a huge let down. Once again stuck on a coach with a large group of people and quickly ferried from place to place, with every move you make dictated by the groups tour guide. It really is a whistle stop tour of sights before you are hurried along to the next point of interest. Sal Rei was in fact a beautiful coastal spot, with plenty to see. From the architecture of the colour washed buildings giving the place a real Brazilian flavour, to the local fish and fruit markets. Thing is the locals aren’t particularly fond of this invasion of foreigners on their quiet day-to-day life. They aren’t rude or unwelcoming, but you do get a real sense of frustration, and who could blame them. When a coach load of loud and obnoxious tourists com 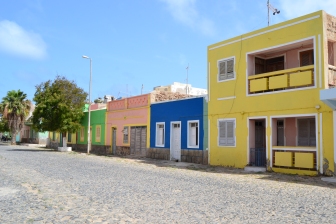 e trapesing through the doors of their markets, or to stand around the tubs where they do their daily washing it disrupts normality. Personally I felt embarrassed, and I haven’t a shadow of doubt that if you were in a small group, or visiting on your own you would be welcomed much more openly. These excursions are happening on a regular basis, and I can’t help but wonder if the locals feel like their lives have been turned into some sort of a show, like animals caged in a zoo.

With this there has also come another problem. With tourists being led in large groups every day, around the same routes, at the same times it has attracted the African wheeler dealers to try take advantage. They wait in packs like hyenas, standing on the outside of the group, following you as you go, waiting for the weak or stragglers to pounce on. They aren’t threatening, just very annoying.
With their constant pestering, they’re like that fly which won’t stop harassing your head on a warm summers day. It sometimes feels like the tour guides are also deliberately taking you too them, being guided like a group of lemmings 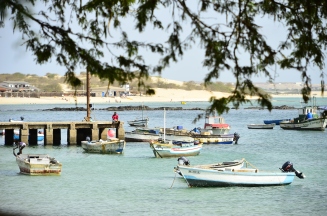 to their inevitable end. The merchandise they have isn’t all that bad. However, if you do decide to visit one of their shops there are a couple of important points…

Firstly, be aware that nothing is priced and they will try to make you pay over the odds for items, so bartering is required.
Secondly, don’t fall for the sob stories or be guilt tripped into buying anything. This is their go to move, and you will see more puppy dog eyes than down your local pet store.
And finally, every single Del Boy wannabe will tell you their stuff has been handmade by themselves or their family. Although the items you can find are nice souvenir material, this is very much a white lie and another technique they love to use. The more you venture around, it will become more apparent that you can find the same merchandise in every single shop you visit.

All that been said Cape Verde is a stunning destination, a destination of peacefulness tranquillity and relaxation. To say it doesn’t offer travellers the sights, or the opportunity for adventure though would be unfair. I think these little islands have the potential to have that in abundance. Even now if you have the resources available you could discover these unspoilt lands, wh 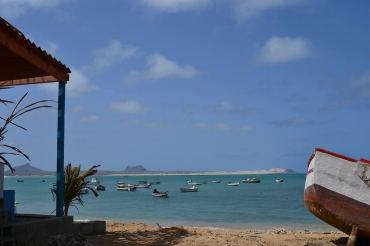 ere a minimal number of tourists will have ever stepped foot. The difficulty is the ease of access to places, and the ability to go off and explore. This I believe will come, my guess sooner rather than later. However, this poses a different set of issues. With the influx of money and improved development you will see greater numbers flock to these shores. This in turn will inevitably put prices up, resulting in the cost-effective alternative to places like the Caribbean not being that much cheaper anymore. Of course the journey would still be shorter, but I wonder if those price did become on par would you still pick Cape Verde over Barbados for example? … I know I wouldn’t.
At the moment in time this is all hypothetical, but something to keep in consideration. What it will do though is allow people to voyage from island to island with relative ease, experiencing the countries real culture for themselves. A Cape Verde where you’re not consigned to your hotel and the tour operators commercialised version must be viewed as an improvement. For me the islands have to find that balance between development and originality. A task many places across the world are currently battling with. It is vital to learn from both the good examples, and the bad.

On a whole Cape Verde is what it is… That little diamond in the rough, just waiting to be unearthed and polished off. 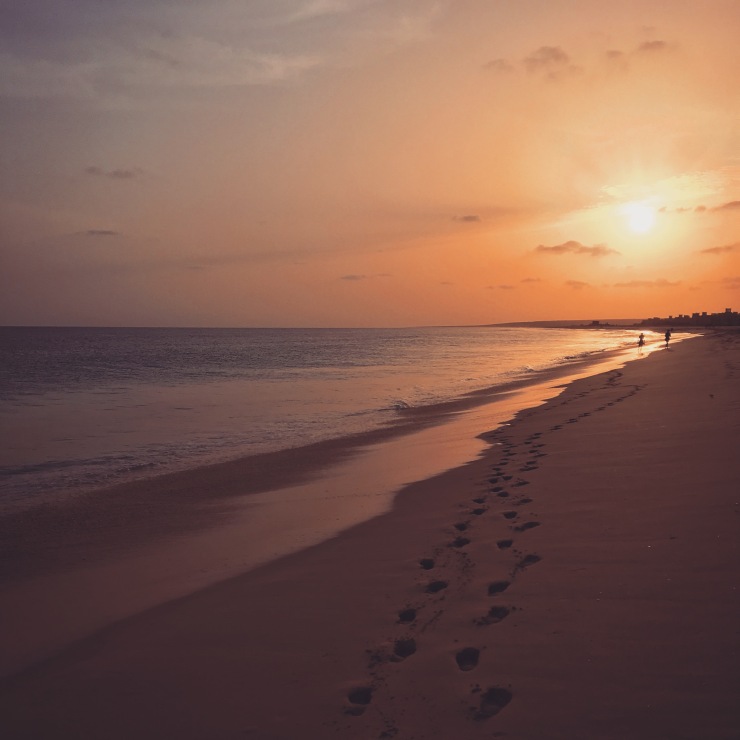